Light In The Dark

Randa started singing when she moved from Morocco to Portland, Oregon. Her vocal melodies are inspired by her multicultural upbringing which consisted of Arabic and Flamenco Music. During her time in the U.S she has also developed a jazzy  vocal style which integrates the Mediterranean  inspired melodies and tones. Randa has been inspired by and studied artists such as Adele, Amy Winehouse, Lauryn Hill and Concha Buika. Randa has covered songs in various languages including Spanish, French, Turkish, and Arabic. The harmonic melodies are recognized in her vocals and are a reflection of her multicultural life experiences. 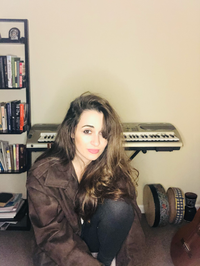 First come first serve and limited seating due to COVID restrictions 😁 We will be playing covers and original pieces. See you there!